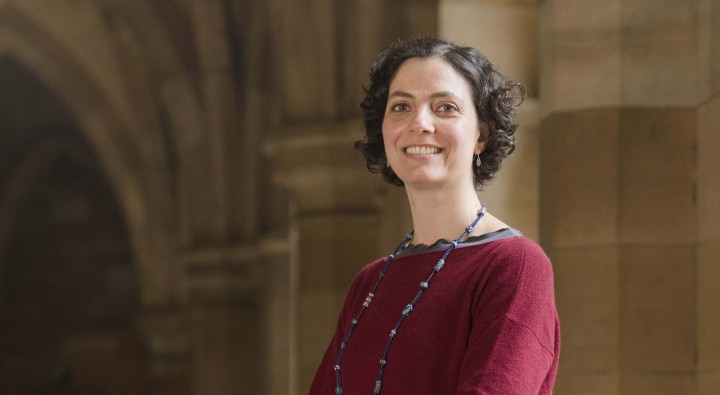 Dr Tiziana Lembo is a Lecturer at the University of Glasgow’s Institute of Biodiversity Animal Health and Comparative Medicine. Her project, Developing Interventions to Raise Rabies Awareness in Rural Africa, was shortlisted for the NCCPE Engage Award 2016 in the Engaging with Young People category.

When Dr Tiziana Lembo was growing up amid the grand Italian gothic arches and intricate sculptures of Padua in the Veneto region of north-eastern Italy, not far from Venice, she never imagined her career might take her to the most impoverished regions of sub-Saharan Africa.

One of her defining characteristics is the fact she is unswervingly determined. Many of the choices she has made, from her own education to the education and support of others through engaged research, have put her on a much harder road than she might have taken.  By the time she reached her 17th birthday Tiziana had already developed a deep interest in animal health and she set her heart on becoming a vet. It was perhaps the first clear example of her refusal to take the easy option. With limited places on Italian veterinary science degree courses she set her heart not only on a profession that was notoriously difficult to enter, but compounded that by aiming for a place in Italy’s top veterinary school at the University of Milan - one of the best courses in the world.

There were only two hundred places available and the selection process was gruelling, with preliminary entry tests taking place before she finally received the news she had been hoping for.

“Yes, I won a place, but I wasn’t one of the top students in the process”, she says, offering valuable insight into the strength of character behind a thoughtful, calm and considered exterior. In speaking to her, you can’t help but be inspired by her academic and social intelligence. Yet you get the feeling that Tiziana’s route to academic success has also been made possible by a strong sense of self-awareness.

A thirst for self-development

When she talks about the ambitions that have informed the decisions that make up her career path it is always with the recognition that each step required her to fill some missing gaps – either academically or practically.

Going through university she identified an interest in the link between animal and public health in disadvantaged areas. For others, that may have sparked a temptation to graduate and then embark on a career. Instead, Tiziana decided to stay in higher education and study for a Master’s degree.

She moved to the UK, settling in the south – a decision driven again by a thirst for self-development. A global career – the ambition for which was increasingly crystallising in her mind – required at least advanced bi-lingual ability.

“I needed to learn English,” Tiziana says simply, “and I wanted to live somewhere where there was a neutral accent. I’d learned English at school, of course, and my grammar was strong, but I needed to work on my vocabulary and live with the language and speak it daily.”

Her years in the UK (sixteen so far) may have made her something of an Anglophile, but her accent still bears the musicality of her Latin roots – though the flawless grammar and vocabulary are themselves evidence of a woman who meets her challenges head on and expects to win. It is an example of the ethos she has carried into her work and which has not only brought academic honours for herself, but also the opportunity to put her skills and abilities to use in making a difference to real lives in impoverished areas of the world through engaged research that has a tangible daily benefit from the start.

Gaining new experiences in the field

With English duly mastered, Tiziana headed north to the home of Arthur’s Seat and the Centre for Tropical Veterinary Medicine in Edinburgh.

Later, job options were considered – names of key public health agencies such as the World Health Organization fluttered in and out of her thinking. Self-awareness kicked in again.

“I realised I wasn’t ready yet,” she said. “I didn’t have the fieldwork expertise.” To fill some of the gaps, she undertook voluntary fieldwork in Latin America and the East African island of Madagascar. Her everyday experiences in the field in turn began to build a bridge between the theory of the lecture hall and the human outcomes of applied practice.

It was in the course of her voluntary work that Tiziana got her first experiences of engaged research, among them a project focusing on the effect of rabies on vulnerable communities – an issue which fascinated her. In publicly engaged research, she had found a niche and a calling; so when the time came to lead a project herself, the opportunity to develop a project which tackled the issues around rabies education was too great to ignore. As she says, “It was a project that was absolutely in line with what I wanted to do.”

Her project, Developing Interventions to Raise Awareness of Rabies in Rural Africa, is a wonderfully unique piece of work that uses, among other things, popular African culture – and particularly contemporary music – to help rural communities most affected by rabies to take preventative measures against the disease.

One of the less well-known facts about rabies – indeed, the greatest tragedy of the disease – is that prompt and thorough cleansing of wounds inflicted by an infected animal is often all it takes to prevent human infection.

But then Tiziana is no stranger to tragedy. Her latest projects, which are in their early stages, include engaged studies into foot-and-mouth disease and anthrax and, much like the rabies project for which she was nominated in the 2016 Engage Awards, involve her working closely with communities who are most at risk of the diseases to educate them about prevention.

That isn’t necessarily as straightforward as it sounds. In many cases the spread of disease is driven by desperation and she is obviously moved by the simple tragedy that the communities most affected by anthrax are often the poorest.

“If you’re starving and you’re presented with an animal that may well be infected with a disease that will also kill you, your choice is to either eat and risk infection, or to continue to starve,” she says, “and that’s really no choice at all.”