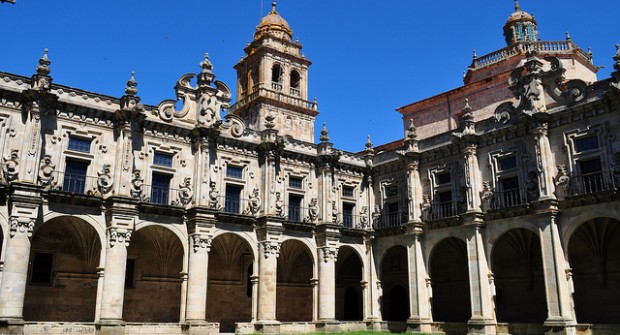 Patricia Duff is Project Director for ArchaeoLink, which provides solutions for archaeologists seeking to increase the impact of their research through public outreach. Liaising between archaeologists and the communities in which they work, Archaeolink helps to bring economic, educational and societal benefits from the archaeological landscape and the research being carried out. Patricia is also an NCCPE Public Engagement Ambassador. Patricia attended The SoPA14[1] Congress on the Education and Socialization of Heritage in Rural Areas, which took place in the Galician town of Celanova, Spain, from the 22-27 September, 2014.

To set the scene, Galicia is an area of richly forested, rolling hills, of rivers and deep ravines, hilltop villages and towns. There are many monasteries in the 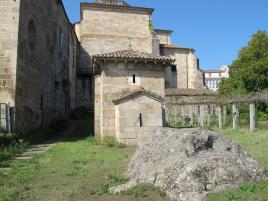 area as there are many pilgrim ways to Compostella. The town of Celanova is dominated by its 18th Century Monastery and Baroque church. In its grounds is the original church dedicated in the 10th century, the only Christian church in Spain built in Arabic style. Another unusual feature is that, instead of obliterating the pagan shrine, as was the custom when Christianity superimposed itself on pagan sites, the church was built beside it. Thus today, we can see the steps carved into the rock and the sacrificial altar used to venerate the gods of old. This is an example of unique heritage which could be enjoyed by many more people.

The SoPA14 conference was attended by delegates from a variety of countries with presentations ranging from how best to save historic buildings from inappropriate development to the dissemination of internet based information; discussion forums such as conflicts between outreach and intrusion; poster displays; as well as a chance to sample local culinary specialities.

Among many notable presentations the following deserve mention. 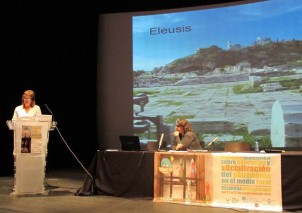 What came out quite strongly is that the financial challenges which have faced the Spanish Government in recent years, causing major cuts in spending in all areas of Heritage, have led to communities and interested groups taking over certain functions that would otherwise have been the province of the local authority. Certain groups have sought independent funding or given their time and abilities voluntarily to further knowledge, research and interest into a variety of cultural heritage facets. This new concept of 'ownership' has empowered communities to continue, if not expand on what has been known, done or disseminated previously, with clear societal benefits.

In an open discussion on funding, conference delegates were interested in the information I gave regarding the UK’s Heritage Lottery Fund (HLF). While lottery schemes exist in European countries, they largely fund infrastructure. It appears that only Britain operates a lottery scheme to provide funding for community-led heritage projects. I directed delegates to the HLF website and suggested some pressure might be brought to bear on politicians in their own countries to implement such a scheme.