Increasing participation from wherever you are 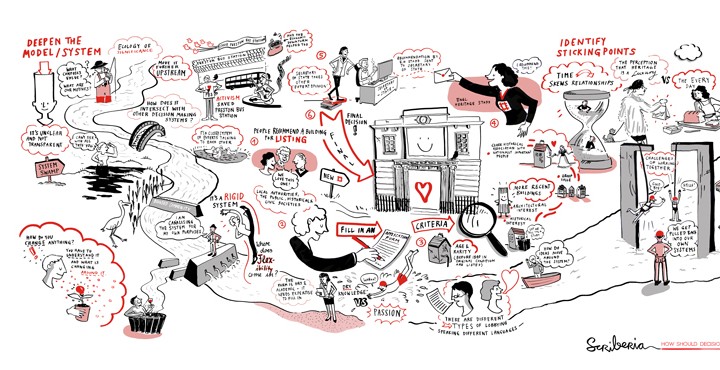 What works for museums and heritage might also work for universities

Helen Graham (University of Leeds) and Rebecca Madgin (University of Glasgow), members of the Heritage Decisions Research Team, share key ideas from a recently completed Arts and Humanities Research Council Connected Communities project and suggest that what the team learnt about increasing participation in museums and heritage is just as relevant for developing engaged universities.

In March 2013, when fourteen of us gathered at Bede’s World in Jarrow, we knew we had in common an interest in decision making, participation and heritage – but we didn’t know exactly what we’d decide to work on together or how. We were funded by AHRC Connected Communities ‘co-creation and co-design development’ pilot project, which aimed to support not just collaborative research but the collaborative development of a research agenda right from the start.

As you can see by how we describe ourselves, we are all situated quite differently in relationship to heritage and its decision-making processes. Some of us are leaders and shapers of policy, organisations or thinking; others of us are practitioners hoping to do good work within structures we don’t control; others of us are university-based researchers seeking to find connections between thinking and doing; some of us are activists for our own histories and heritage. Many of us fall into more than one of these categories. The aim was to use our collective experiences, perspectives and positions to create a research project which might explore how to increase participation in heritage decision-making.

Knowing how to increase participation

We aimed to identify how to increase participation in museums and heritage. We did this using two methods. The first was by reflecting on innovative work already undertaken by practitioners in the research team. The second was through conducting a number of research experiments.

Increasing participation…from wherever you are

Increasing participation in universities and research

While we all had these ideas in mind for increasing participation in museum and heritage contexts, those of us based in universities have started to see they are just as valid there as well, as Paul Manners, another member of the team argues in this blog. In fact the complex decision-making structures in universities and the emphasis on individual academics driving research and teaching lends itself to forms of politics focused on generating informal networks, using space for agency and creating momentum, and thinking systemically (both within the organisation and how the university fits within bigger flows) to identify levers for change.

What do you think? Have your say by leaving a comment below.