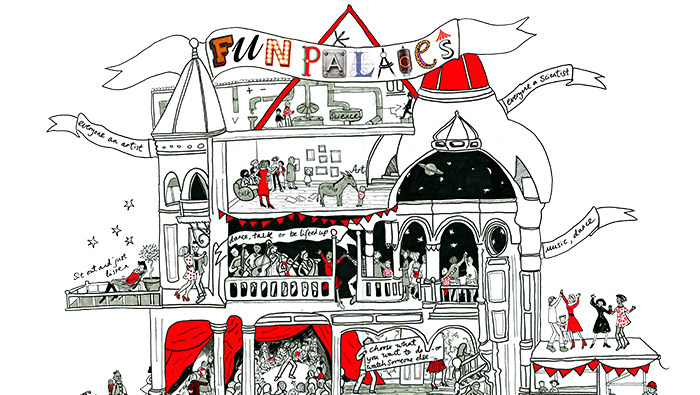 In the run up to our Engage 2014 conference, we are exploring the conference themes of 'Captivating places; Captivating ideas; Captivating people: Unlocking the potential of curiosity-driven engagement'. Here, Stella Duffy, Co-Director and Founder of Fun Palaces, shares her vision of engaging places.

The request to write this piece asked that I consider ‘how the principles about effective engagement’ shaped what we’re doing with Fun Palaces.

I have no idea. I don’t know what those principles are. I don’t work in engagement – I am a writer and a theatre director, and after 31 years in the arts, I’m tired of ‘engagement’ too often boiling down to £10 tickets sold to people who’d happily have paid £30, or one school trip a year for a child who still doesn’t feel that museum visits are for life, not just in school groups. And yes, of course there are amazing things happening with cheap tickets and schools in arts and culture, but all too often, it is marketing masquerading as engagement.

I didn’t know I was starting a campaign when I called the first Open Space session that led to Fun Palaces. Those of us in that session imagined creating one or two temporary Fun Palaces, in already-existing spaces, based on theatre director Joan Littlewood and architect Cedric Price’s (never built) idea of a free space welcoming to all, housing interactive arts and sciences, and – crucially – created and curated by, for and with local people.

Others began saying they’d like to join, make their own. In person, in email, on Twitter (Twitter has been an astonishing tool for sharing the idea) and it took on its own momentum. It became my (unpaid, after-other-work) job for six months and then my part-time work for the past year – working with a very small and mostly part-time team, holding together a national and simultaneous celebration of participation in arts and sciences, created by, for and with local people, across the UK and beyond, in over 120 locations.

I think people said yes because the concept is enticing AND do-able. Can you make, locally, a free event sharing the interests of those making the event? Can it be about learning from each other rather than the traditional performer / observer, lecturer / listener, maker / audience dichotomy? A Fun Palace is not a fête, there is a clear political element insisting that within our local communities we have all the smart, willing people we need, we don’t need to fly in artists, academics, scientists or anyone to make it for us, we can do it ourselves, for ourselves.

People joined in because we made it easy for them to sign up and share their plans widely, because they saw others doing it, and because they wanted to be part of something both local and beyond-local.

Their joining in showed us we were not running a one-off, but an ongoing campaign, grounded in community and the belief everyone is an expert in their own culture. It showed us that what we are doing is unearthing what is already there, giving a national platform to the people who already care about their community, giving opportunities to lead to people who have never created locally before. It has also reminded the artists, scientists and academics creating their local Fun Palaces that they – we – are community too. It’s all of us.

This isn't just theory. My wife, who has never produced anything or taken part in a community event before, is leading on our local Fun Palace in south London. Which means I'm sitting at our kitchen table, after work, adding the details to our posters. Running the national event and volunteering my help in our local one.

These then, are my principles of effective engagement:

And if there’s no money and you don’t know how to do it – yet – start anyway. If it looks like fun, they will come.

Stella Duffy is a writer and theatremaker, co-director and founder of Fun Palaces – a free nationwide celebration of arts, sciences and culture – across the UK 4/5 October 2014 and annually thereafter.