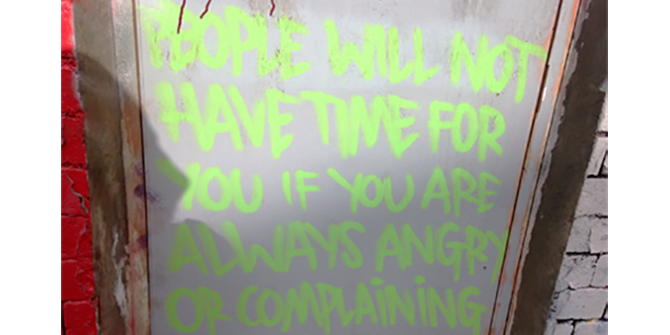 Steve Pool, a member of the UK Community Partner Network, shares his experiences as a Co-investigator on an AHRC Connected Communities project.

I found this graffiti in Sheffield and wondered if I was one of those people who is always cross about something. Working in communities and working with people in need it is sometimes difficult not to feel angry. We face a difficult future, libraries are closing and cuts in funding are impacting on some of the most vulnerable people in our society. I’m currently working as a Community Co-investigator on an AHRC Connected Communities (CC) project and although there are many new challenges to work through it has been interesting as a community partner to have a defined role and recognised status on the project.

I’ve been in this role for eight months. During this time I’ve started to think about how the role has impacted on the way I approach the work and the way I am perceived by my colleagues both at the university and outside.

A set of key questions have emerged.

Community Co-investigators have been piloted through the Connected Communities legacy programme. The aim of the scheme is to address concerns around the inevitable power imbalances that emerge through community university partnership working. Though I had previously worked on eight CC projects and numerous other research projects as a visual artist, I had not taken much notice of the universities’ structures and hierarchies. I was interested in what becoming a Community Co-I would change in my relationship to projects.

My host organisation is Castlefield Art Gallery in Manchester. As an experienced community organisation they have given me a lot of support and direction. I have felt that the Co-I role has given me the status to work as a bridge between organisations. Initially, I was concerned that by fitting into the structures of the university project it would become more difficult to bring in ideas from a community perspective, but this hasn’t really happened on our project. In terms of status I would describe the situation to others as being similar to a promotion in rank from private to sergeant but not actually being in the army.  One of the main positives of the Co-I role is that I have been involved in planning and decision-making from the very start of the project, which does feel different to other projects where communities are often approached after the project has been planned, structured and funded.

Eight months in and I’m still not sure of the impact of my new role on the way I feel about the work. Like many hats we can put on and take off it has on occasion been very useful. I am in a privileged position of always feeling respected by my university based co-workers my ideas are valued; my voice is listened to. As a Co-I on this project, as well as a community partner, I have felt empowered by having a clearly defined role. When it comes to power and status, however, I think as a programme we have more work to do. The potential of the co-production of research through community university partnerships holds the potential to level the ground, to form foundations where people can build new knowledge together. It is this approach to building things together, to working through problems, to accepting difference that reminds me that essentially we need to stop getting angry and making time for each other.