Winner at the NCCPE Engage Awards 2016 in the Engaging With Young People category.

In a part of England where nearly half of all 12-year-olds have decaying teeth, this highly inclusive and inspiring project was launched. It uses drama as a means of sharing sometimes difficult messages for the good of teenage oral health. It proved an effective way to spread research findings from the University of Leeds directly to the audience that really mattered - the teenagers of Yorkshire. Co-developed with the people who they hoped to engage, the pupils were inspired by what they saw.

The University of Leeds worked in partnership with Theatre of Debate, undergraduate students (dentists, scientists and performance arts), patients and adolescents to co-produce the play ‘Don't Smile’.

The project was led by Professor Sue Pavitt, Professor in Translational & Applied Health Research at the University of Leeds’ School of Dentistry.

School of Dentistry, University of Leeds

Dr Peter Day, School of Dentistry, University of Leeds, provided access to families with Ameliogenesis Imperfecta and those expereincing dental trauma. This allowed the students access to the lived experience of conditions affecting the oral health and wellbeing of young people.

Theatre of Debate is known for  making the complex and challenging…meaningful and engaging.  Director Nigel Townsend worked in an 'Artist in residence' style alongside performing arts students, dentists, scientists and patients to develop a concept for an oral health play.

Batley Girls’ High School has a very high BME composition and is located in one of the poorest areas of Yorkshire - a region known to have significant oral health issues. Co-Head David Cooper strives to create a culture at the school that makes the most of every opportunity, embracing new ideas with enthusiasm. He brought his wealth of experience of the cultural knowledge of pupils attending the school to the project. The teenage students engaged fully throughout thanks to the sponsorship of the co-head, and continue to do so helping the University by suggesting a new project for the future.

Billed as ‘A Love Story with a Dental Theme’,the drama was developed to explore whether using theatre was an effective way to share knowledge in a non-judgmental way, allowing for a more open debate with young people, and improving awareness in adolescents who were at risk of oral health issues.

Given how many people are scared of the visiting the dentist, this project was particularly challenging.

In Yorkshire, 45% of 12-year-olds have rotten teeth. It results in pain, lost schooling and low self-esteem, and is correlated with social and health inequality. A healthy mouth and smile means that children can eat, speak and socialise without pain or discomfort and absence from school.

Whilst the problem is largely preventable, reaching those youngsters who are the most vulnerable in deprived areas is challenging.

The Theatre of Debate worked  alongside art students, dentists, scientists and patients to develop a concept for an oral health play. To facilitate this they arranged a workshop with all partners, and pupil audience representatives.

Patients and their families presented aspects of the lived-experience of Amelogenesis Imperfecta (a group of inherited health disorders resulting in abnormal tooth enamel).  Dental students shared their experiences of treating a variety of dental conditions.

Judith Johnson (playwright)  worked closely with the Performing Arts students, devising scenarios to inform the script development. These ideas were tested with school pupils, exploring how the play could be designed to encourage their full participation in a debate about oral health.

Dental students were invited back alongside SMILE advisers to feedback and check the accuracy of the evolving script. A media team filmed throughout to create a COHESION documentary in order to share the knowledge of the process with others.

An extensive week of rehearsals was followed by a premier to the public and the following week performances in schools in Batley and Bradford, places with known oral health inequalities.

At each performance of the ‘Don’t Smile’ drama, a facilitator from the Theatre of Debate carried out a poll relating to oral health awareness and opinions. Following the play she revisited the poll to test for a change in response and then facilitated a debate between the audience and the actors who stayed in character providing the opportunity for the audience to ask questions.

Questionnaires were also completed and analysed. They showed that the main, embedded oral health message 'dealing with dental trauma' was understood by 100% of the audience.

Consistently 99% of audiences of vulnerable teenagers from areas of worst oral health inequalities rated the play excellent or very good with 95.5% saying they would like to see more plays on aspects of oral health/dentistry.

Staff, pupils and the public were very enthusiastic about ‘Don’t Smile’. No deficiency in content or approach was identified although 4% cautioned that the reference to bullying in the play was uncomfortable, indicating that pastoral support was available for students experiencing bullying at school.

The main findings from the project are to be published in the British Dental Journal.

The project team concluded that ‘Don't Smile’ was an effective way to communicate research and oral health knowledge – and that theatre is an effective media to impart knowledge that pupils ordinarily had limited access to, and which they viewed as a 'treat'.

Oral health and dentistry is historically a challenging area to elucidate public involvement in. Patients and the public typically have transient oral health problems, are commonly dentist phobic, and are not united with others with dental health problems, unlike, perhaps groups of patients with other diseases.

A very welcome – indeed surprising - development for the team was the fact that, after the play, pupils and staff were keen to do more research and approached the School of Dentistry to co-develop participatory dental research.

As a result the University established 'RAISED In Yorkshire' (ReseArch In Schools Evaluating Dental health) - a pupil peer-to-peer monitoring of oral health and tooth brushing behaviour.

Another powerful legacy is the web-based, COHESION Pilot documentary accessible to all. It represents a lasting legacy for knowledge transfer to reproduce the COHESION Pilot approach in other settings suited to the interface of science and the arts.

The School of Dentistry can show clips of the ‘Don’t Smile’ play to its students to illustrate the impact of poor oral health on social isolation, the importance of considering patients holistically, and the importance of research to deliver improved patient benefit.

COHESION actor Katie Mahon is adopting lessons learnt from the project within her own fledgling applied theatre company.

There is also an appetite to roll the project out to other schools, and for a project to text pupils to encourage them to brush their teeth.

For further information, please see the University of Leeds’ website or listen to our interview with the project team.

Dancing in the dark: engagement and risk

02 / 07 / 2020
This blog post is a collaborative piece based on a workshop delivered at Engage 2019, during which participants were encouraged to take risks to support better public engagement.
Read more 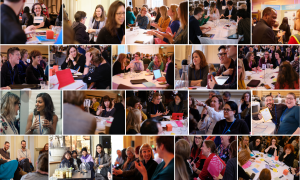 09 / 06 / 2020
Celebrating PEP Stories We were delighted to welcome six brilliant Public Engagement Professionals (PEPs) to speak at the PEPTogether on Thursday 21st of May, each sharing their experiences and...
Read more

How can we work together as a sector and adapt to these changing times?