Skip to main content
Home › Do engagement › Inspire me! › Case studies › Around the Toilet

Winner at the NCCPE Engage Awards 2016 in the Arts, Humanities & Social Sciences category. 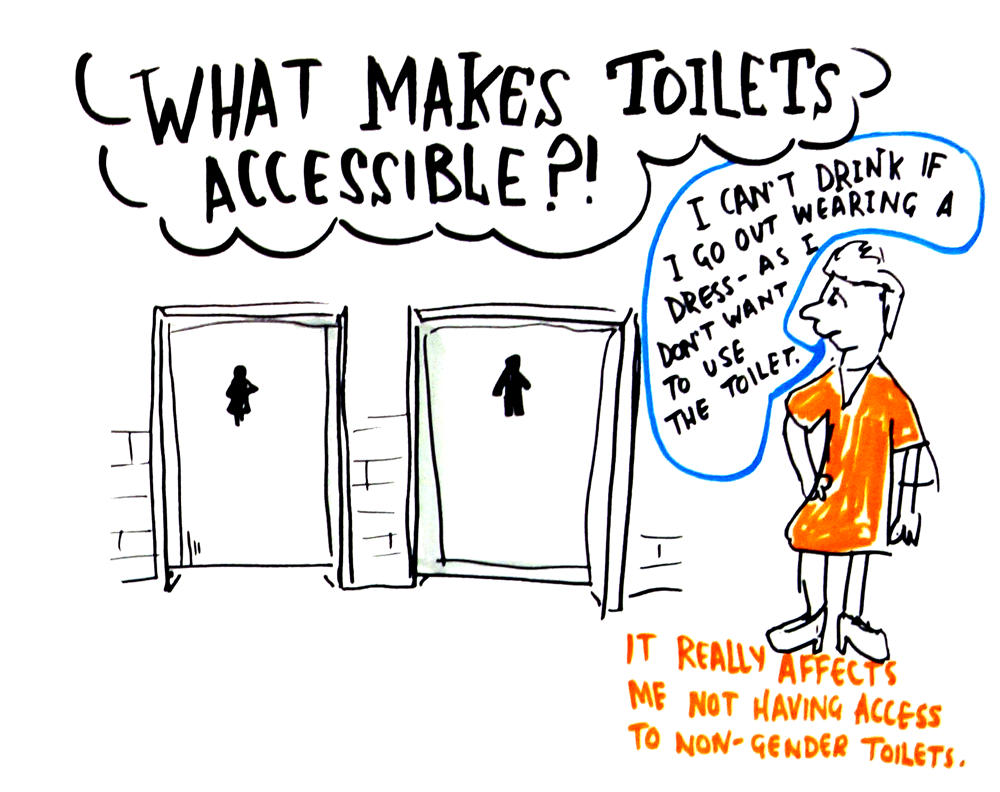 This project sought to encourage a better understanding of how toilet access and use affects people, to inform the development of more inclusive toilet spaces. The best way to find out about the issue is to watch their film below.

Given these challenges, a team of activists, artists, students and academics came together to highlight the politics of the toilet. Focussing on engaging with groups whose experiences of toilets was not positive, the project sought to understand different perspectives, and use them to raise awareness of how to create more accessible toilets, available to all.

Around the Toilet was a diverse team of activists, artists, students and academics which included:

The project team sought to engage a range of people including:

The aim of Around the Toilet was to use public toilets to facilitate dialogue between the diverse communities that use them, thereby raising awareness of the politics of toilet provision and accessibility, and developing more inclusive toilet spaces.

The project sought to:

Whilst the toilet is often considered a mundane space, for many without suitable toilet provision, toilets are a crucial practical issue. Starting from the position that ‘peeing is political’, the Around the Toilet team explored toilets and accessibility in creative and innovative ways.

Building regulations state that ‘people, regardless of disability, age or gender should be able to … gain access within buildings and use their facilities’ (DCLG, 2010). Yet toilets remain inadequate for many and accssible toilets which are described as being accessible often aren’t accessible enough (Changing Places,2013).

There are pressing questions and concerns about school toilets being spaces which facilitate bullying (BBC, 2010); public toilet closures denying access for many (The Guardian, 2016); and gender inequity issues being inherent in the design and signage associated with toilets (The Daily Telegraph, 2015).

The diversity of existing toilet campaigns highlighted discontent with this most mundane of spaces.

Working at the intersection of some of the groups most affected by inadequate toilet provision, Around the Toilet was designed to facilitate a diverse dialogue about what access means within and beyond the toilet. In order to be effective, this also meant broadening and deepening what people understood by the term 'accessibility'.

The project team believed that changing the discourse around toilets is a key component of creating structural change and that therefore the collection of stories of accessibility issues around public toilets would be as important as communicating with design professionals.

In order to understand the diversity and complexity of experiences, the research was made publicly accessible from the outset. Paid community co-investigators from partner organisations were involved from the planning of the project, ensuring that their input and expertise both informed the approach, but was also recognised in an equitable way with others on the project team.

A summer programme of arts-based workshops were held and boundaries between researcher, participant and artist were redrawn as researchers took part in workshops led by artists/partner organisations. Workshop participants were also invited to join the dynamic project team whilst social media was used to go beyond the reach of those physically accessing workshops and events.

People around the world were inspired to tweet their toilet stories and follow the project’s progress via a lively blog. All the while, tangible outputs at each stage of the project were created for use by all involved at public-facing events and training.

The first phase of the project was a series of workshops for queer, trans and disabled people because these voices are rarely represented in design processes; and they face intersecting barriers to toilet use. For example, some trans and queer people don’t feel represented by binary-gendered toilets, so they campaign for gender-neutral toilets. Often, the gender-neutral options available are disabled/accessible toilets. Conversely, some disabled people campaign for gendering the accessible toilet, arguing that it represents them as ‘genderless’.

Conversations with these groups therefore offered insights into the complexities of toilet accessibility. From here, however, other themes emerged, focussed on labour, religion, and schools. In phase 2 of the project, cleaners; those with religious convictions; and school pupils and staff; were invited to contribute to two follow-up projects: Travelling Toilet Tales and Storying School Toilets.

Design professionals, including architects, were important collaborators throughout. The project team worked specifically with trainee architects at University of Sheffield in developing a digital toolkit to inform and engage with design professionals, making it easier for them to take on board the findings from the research.

Over the course of the project the team had grown to include workshop participants. Some participants devised follow-up projects, ran further workshops and/or became paid project artists. Architecture students have since received salaried-roles in designing and delivering innovative ways to disseminate findings to design professionals.

Evaluation was an important component of the project, integrated at every stage. It was continuous and iterative. At the heart of the approach was a constant supported dialogue between the community partners and the academic team. Participants in the project were encouraged to offer feedback and reflections, through a range of mechanisms including interviews; evaluation forms; feedback cards etc.

The Toilet Toolkit is being made available to architectural practices and Civic Trust organisations, ensuring a tangible and ongoing project legacy.

The project installation was exhibited at various venues around the UK over summer 2016 and the social media presence of the project has enabled the continuation of a dynamic network connecting academic, community, artist and activist individuals and groups.

The project team has secured impact and engagement funding to further dissemination of the Toilet Toolkit whilst toilets in institutional spaces (schools, libraries, hospitals, prisons) have been identified as requiring further research. Two journal articles have been published drawing on the learning from Around the Toilet:

For further information, please see the Around the Toilet website or listen to our interview with the project team.