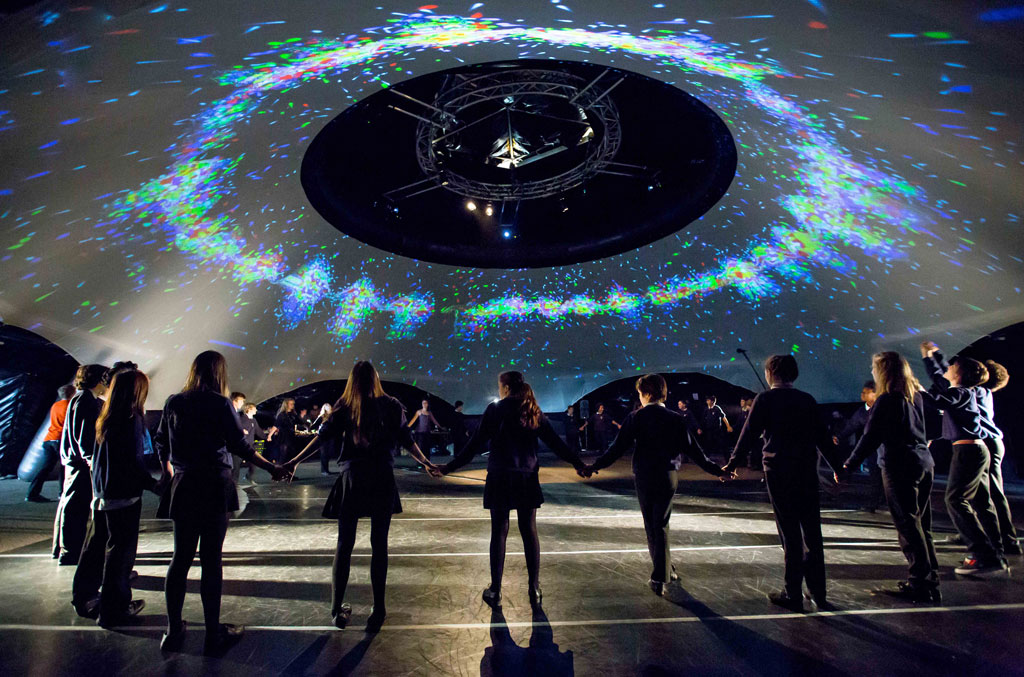 danceroom Spectroscopy (dS) is a cutting-edge, interactive public engagement project that invites members of the general public to step into an interactive atomic simulation. Originally developed from Dr. David Glowacki’s research into computational atomic dynamics it has formed a major attraction at cultural and educational settings within the UK and internationally, elegantly merging research in science, technology, and art to engage people from a range of backgrounds. By visualising participants as energy fields in real-time, participants take part in an immersive visual, kinesthetic and auditory experience, generating sound and image using their movement. The project aims to open ways for a greater appreciation of the inherent beauty of the invisible atomic world, inspire the public to ask how scientists understand the world, and to enable participants to have fun.

Visitors have encountered dS in a variety of forms, each crafted in collaboration with partner institutions to reach a wide range of audiences. For example, dS has been deployed as: an interactive art installation; the fabric that knits together an acclaimed dance performance called Hidden Fields (HF), and an educational tool for teaching children about science. The project has involved dozens of prestigious international arts and cultural venues, including the Barbican Arts Centre (UK), the London 2012 Cultural Olympiad (UK), The Big Bang Science Fair (UK), World Science Festival (NYC), and reached over 100,000 people spanning ages from 3 to 83. Audience feedback gathered by interview and survey, has shown that dS reaches out to non-traditional audiences, inspiring curiosity in people who otherwise feel intimidated by science. The project continues to develop and maintain evaluation plans with collaborators, partner institutions and funding bodies, enabling a continual development of the audience experience.

“dS is a ground-breaking project that has overcome the perennial challenge of making a heavy and complex subject matter not only accessible but engaging, interactive and beautiful.” UK Media Innovation awards

Upcoming opportunities for dS include a tour of dS in the USA during 2014/2015, including dates in Stanford and Berkeley; an invitation from the ZKM Centre for Art and Media Centre in Germany to develop a permanent dS installation within their gallery; the development of educational applications of dS for use in schools as part of the national curriculum and adapting dS into a platform for crowd-sourced research in biochemistry.